At the side installation of capacitive sensors we prefer to put the sensor tip on an angle of 20 degree to protect sedimation. The sensors should be protected against damages by side power effects for example by blungers. 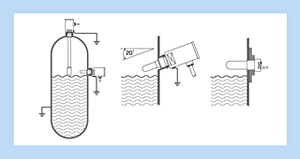 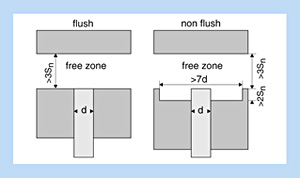 When collocating the sensors, a minimum separation must be kept between the devices in order to avoid mutual influence. When in doubt, a test should be conducted under application conditions. For capacitive sensors, the lateral separation from one another must correspond to at least twice the diameter of the sensor. For separations greater than eight times the diameter no mutual influence is to be expected. For oppositely mounted sensors, a minimal separation of eight times the nominal switching separation should be allowed for.

In order to prevent destruction of the threaded bushing during fitting, the following maximum torques must not be exceeded:

PTFE-sensors may only be tightened by hand

Serial connection
For the serial connection of two wire or three wire sensors the individual voltage drops are added together. Therefore there is a lesser operational voltage at the disposal of the load. The addition of the switch-on delay times should be noted.

Sensors for personal security must have a qualification approval according to EN 61508 and must be labeled accordingly. Sensors that are not labeled must not to be used for applications of this kind.

« back to application notes      forward to glossary »