Capacitive level sensors react to conductive materials and non-conductive materials with a dielectrical constant ε >1. The switching point depends on the material.
When the sensor-tip is immersed in a fluid, a switching command inside the device is triggered. This trigger is set between contact with the liquid and some mm more into the liquid. This distance between the tip of the sensor and the trigger is the nominal switching point. The immersion-distance has a negative sign, e. g. – 8 mm.
The following table lists the approximate values for the material dependent reduction factors. In practical applications there could be variations, because of the mounting conditions, for example. 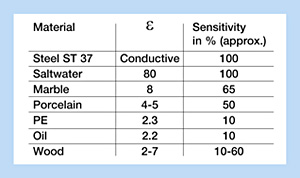 The water content of an object or a liquid has a decisive influence on the switching point. A high humidity content increases the switching point considerably.
If the sensor is moistened with conductive materials, its function can be impaired when a conductive film builds up that electrically connects the sensor electrode with a metallic conducting side.

The switching point or rated operating distance is a device parameter that does not take into account sample variances and external influences such as temperature and supply voltages. Optical sensors are switching by immersing the tip. When the sensor tip is immersed in a fluid, the switching point has a negative sign.

The usable operating point is in the entire allowable temperature and voltage range is between 80% and 120% of the effective operating distance.

The assured operating point takes into account all the external influences, sample and media variances and is in the range from 0% to 72% of the rated operating distance point. Within this range a guaranteed switching is ensured.

The operating distances are given for an ambient temperature of 23 °C. In the permissible temperature range the switching point varies by less than 15% from the value at 23 °C. The temperature of the measured object has no influence on the switch point.

The repeating accuracy describes the maintenance of the switching point after the repeated immersing in the liquid under specified circumstances. EGE sensors have typical tolerances of less than 3% of the effective operating point.

The maximum switching frequency of the sensor is determined at nominal switching point Sp when immersing in the water.

The operating voltage is the voltage range in which EGE sensors function safely. For a constant voltage supply it is important to make sure that the limits are still observed when the residual ripple is included.

This current gives the maximum long-term current for the switching output of the sensor at an ambient temperature of 25 °C and ohmic load. At an elevated ambient temperature, the current load capability decreases. For analog outputs, the boundary values given in the appropriate technical data, and particularly the permissible values for resistance loads, must be observed.

The short circuit proof ensures the sensor against destruction through a short circuit on the output. After removal of the fault, the output is reactivated. Where a maximum overload current is listed, this should not be exceeded.

This value indicates the median value of current at which the short circuit protection responds with a tolerance of ±20%.

The reverse polarity protection prevents destruction of the sensor by a reversal of the polarity of the voltage supply.

The voltage drop arises at the internal resistance of semiconductor elements, which are in the current-path of the output. It is dependent of the load-current and is declared according to EN 60947-5-2 for a mean current of 50 mA.

The minimum load current is necessary for flawless operation with two-wire devices.

The current consumption is the maximum value of the no-load current Io that the sensor can absorb without a load.

The ambient temperature indicates the maximum allowable temperature range for the sensor.

The EMC class is a measure of the noise immunity of the sensor against external electrical and magnetic influences. The information is based on the standard EN 61000-6-2.

EGE sensors have a switch-on impulse suppression that blocks the output during the switch-on phase, when the operational voltage is applied.

The protective system indicates the protection of the sensors against penetration of foreign bodies and water according to EN 60529.

The connection of the sensors is accomplished through plug-in connections or cables. Different cable types and lengths are available upon request.

« back to intructions for mounting

Flow sensor for water based media with digital display